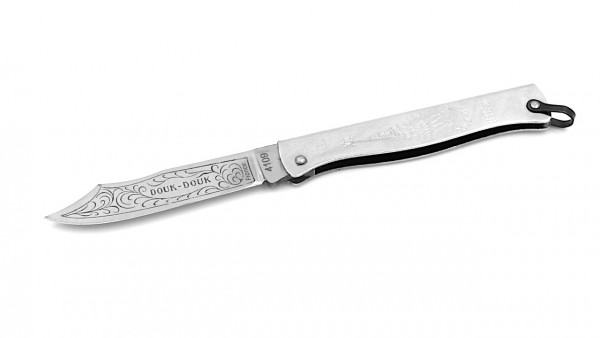 Prices incl. VAT (the total price may change depending on the VAT rate of the delivery country) plus shipping costs

Description
Description
The Cutlery Cognet was founded in 1902 in Thiers. Here, DOUK DOUK knives, which are especially... more
Close menu

The Cutlery Cognet was founded in 1902 in Thiers. Here, DOUK DOUK knives, which are especially popular in Africa, have been produced almost unchanged for almost 100 years.
The simple, charming knife offers a comfortable fit due to its flat design. The long tradition makes the Douk-Douk a special knife for both users and collectors.
Particularly striking and characteristic are the ornaments and ornaments. Stainless steel Z70CD15 steel was used for the blade.

The name Douk-Douk goes back to a secret society called Duk-Duk. The secret society represents part of the traditional culture of the Tolai from the area around Rabaul in New Britain (Papua New Guinea) in the South Pacific. The origin of this covenant lies on New Ireland, around 1830 Duk-Duk became part of the already existing Tubuan Covenant integrated. The company symbol - the Duk-Duk - is a mysterious, dressed in leaves leaves figure wearing a helmet. It is reminiscent of an oversized candle extinguisher.

Viewed
This website uses cookies, which are necessary for the technical operation of the website and are always set. Other cookies, which increase the usability of this website, serve for direct advertising or simplify interaction with other websites and social networks, will only be used with your consent.
Decline Accept all Configure